5. Strengthening partnerships with and opportunities for Māori

7. A world-class infrastructure system: how we get there

Infrastructure is about choices

For example, long-term trends such as climate change will have significant impacts on many parts of our infrastructure system. Our population is increasing and changing, and this will affect the quantity and quality of the infrastructure we need. And construction costs have been increasing, placing pressure on infrastructure budgets. We have an opportunity to overcome these challenges by taking a new approach to planning, delivering, maintaining, funding and financing infrastructure.

Figure 5: The challenge, the response We can’t build our way out of every infrastructure challenge.

At present, we spend around 5.5% of gross domestic product (GDP) on public infrastructure. This includes our transport, water, hospital, education and defence facilities and excludes privately provided infrastructure like electricity generation and telecommunications.18 If we attempt to build our way out of current and future infrastructure challenges, it will cost around 9.6% of GDP over a 30-year period. This is equivalent to $31 billion per year and almost double what we currently spend. This is caused by several factors, which are set out below.

Historical infrastructure deficit: New Zealand has under-invested in infrastructure in the past, which has lowered service quality and congested infrastructure. We also lack the infrastructure we need to support housing growth. We estimate that the new investment needed to meet this challenge would cost 0.7% of GDP every year over a 30-year period.

Demographic change and economic growth: New Zealand’s infrastructure must evolve to serve a growing and changing population and economy. Our population is predicted to rise from 5 million to 6.2 million by 2048 (or 6.7 million under a high growth scenario), even after assuming that migration slows down.19 The nature of work and the nature of our workforce will continue to evolve.20 An ageing population and regional differences in growth rates will also affect infrastructure use. Responding to these trends will require new roads, improved public transport systems and water systems for growing cities, freight and port infrastructure for growing economic activity, and trade and telecommunications infrastructure to connect us to each other and to the rest of the world. We estimate that the infrastructure needed to support population and economic growth would cost 1.8% of GDP every year over a 30-year period, in addition to the above need.

Cost pressures: The cost of building infrastructure has been rising more rapidly than costs in other sectors of the economy. It’s currently difficult for the construction industry to hire the skilled people it needs to meet increasing demands. We face competition for labour from an infrastructure boom in Australia, where wages are considerably higher. Uncertainty about future investment plans can reduce productivity growth by discouraging companies from investing in skills and machinery. Cost and schedule overruns on one project can worsen this by increasing financing costs and delaying other projects in turn. Costs are also driven by the increasing complexity of our projects and slow, costly and bespoke consent processes. Unless we address these root causes, these trends mean we’ll have to spend more to get the same results. We estimate that these cost pressures will add 1.6% of GDP to our infrastructure costs every year over a 30-year period, in addition to the above needs. 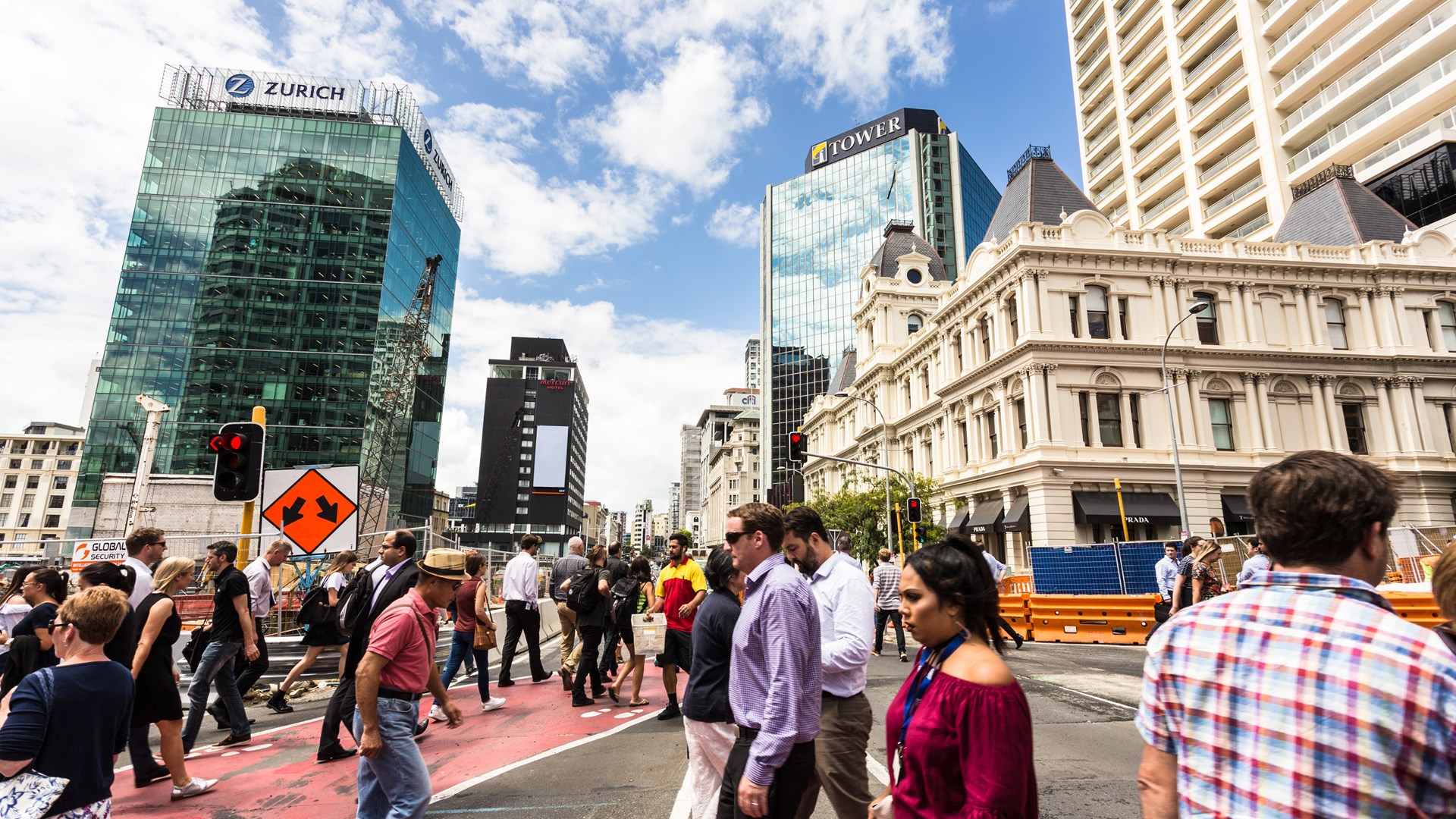 We have an opportunity to improve the way we plan, fund and deliver our infrastructure.

It won’t be enough to simply keep doing what we’ve always done if we want to keep up with our expectations for life in New Zealand. While we’ll need to invest and build more, this will only be one part of the solution. We can also be smarter in how we plan, deliver and use our infrastructure. We’ve identified four ways of achieving this:

Make better use of infrastructure.

We need to make better use of both the infrastructure we already have and the new infrastructure we build. We can spread the load on our roads, water networks and other infrastructure through tools like education, regulation, pricing and design, which encourage people to use alternatives (such as public transport) or avoid using them at peak times.

This could mean improving bus services so there are fewer cars on our roads, using water metering to identify and fix leaks, or requiring flexibility in zoning policy so more houses are built in areas where there’s already infrastructure in place.

More examples of how we can make better use of existing infrastructure are set out in Table 1.

Infrastructure is too expensive to get wrong. We need to make better decisions so we can be confident that the infrastructure we do build will help solve the problems we face. We can:

Our project selection process must be robust, replicable, transparent and deliver value for money.

New Zealand lacks a lot of the important infrastructure we need. To address this, we need to increase the amount that both the government and the private sector spend on infrastructure over the next 30 years. It will also mean using a broader range of funding and financing options, which could include:

To create incentives to use both existing and new funding and financing tools to address our infrastructure challenges, we also have to consider the best structures for ownership and governance.

Funding represents all the money needed to pay for infrastructure. It comes from the community through users, taxpayers and ratepayers. In contrast, financing is about when we pay for our infrastructure. It could mean using cash surpluses now or borrowing from sources we need to repay later.

The scale of our challenge means we need to get faster and more efficient at building infrastructure or else we’ll always be on the back foot. Options for this include:

These are steps that can help deliver our infrastructure more quickly and improve the results, giving New Zealanders better services at a lower cost.

All these responses are needed to solve the infrastructure challenge.

Each response can make a big difference to solving New Zealand’s infrastructure challenge, but the size of the problem is too large for any one action to be enough by itself. We’ll need to use all four to make a difference.

Table 1: Examples of better use of existing infrastructure

Table 1: Examples of better use of existing infrastructure

Infrastructure is about choices

We have choices in how we address the infrastructure challenge, but these involve making trade-offs.

Because we have limited resources with which to build, operate, maintain and renew infrastructure, we can’t invest everywhere at once. Improving infrastructure in one area can mean leaving needs unmet in another. A careful prioritisation of investment is needed when deciding where, when and how much to invest.

When faced with options to manage congestion on an infrastructure network for instance, an operator may charge more at peak periods to spread the load across time and avoid the need for expensive new physical assets and ongoing operational costs. This is an example of a lever that makes better use of existing infrastructure. It can be an effective way to manage costs. For instance, Transpower estimates that without a peak-demand charge for electricity transmission, the scale of physical investment would need to be around 2-9% higher.22 Pricing strategies can be difficult to implement for public infrastructure however, meaning either lower service quality for communities (for instance, rising traffic congestion), or greater infrastructure investment, which comes at a cost to users or taxpayers.

In this way, decision-makers face choices between the appropriate response (better use of existing infrastructure, project selection, streamlined delivery and funding and financing) and the service quality that communities will experience. If we select bad projects, the funding required to address our infrastructure challenges may be higher. If we deliver projects inefficiently or slowly and don’t make better use of existing infrastructure, service quality may fall. Depending on the nature, reach and network of infrastructure, these trade-offs can impact local communities, cities, entire regions or the whole country.

This strategy assumes that we’ll need to improve how we use all four responses to maintain and increase the value we gain from infrastructure.

This strategy is consistent with the government’s broader Economic Plan.

The government’s broader economic strategy, called the Economic Plan, aims to tackle the long-term challenges facing the New Zealand economy to improve the wellbeing and living standards of all New Zealanders. It names four economic priorities and eight key shifts that are needed to build a more productive, sustainable and inclusive economy.23 This strategy overlaps and is consistent with the following core principles of the Economic Plan:

The government has several policy reviews and reforms underway that will have big impacts on our infrastructure sectors.

These reviews and reforms will touch and affect most, if not all of New Zealand’s infrastructure delivery in some way and are relevant to the implementation of this strategy. They’re likely to affect the way infrastructure is consented, delivered, owned and governed.

Some of the key reforms are discussed below.