5. Strengthening partnerships with and opportunities for Māori

7. A world-class infrastructure system: how we get there

Planning for a 30-year infrastructure horizon requires an understanding of major long-term trends. In developing this strategy, we’ve made assumptions about our population, our changing climate and the inevitable disruption that technological change will cause. 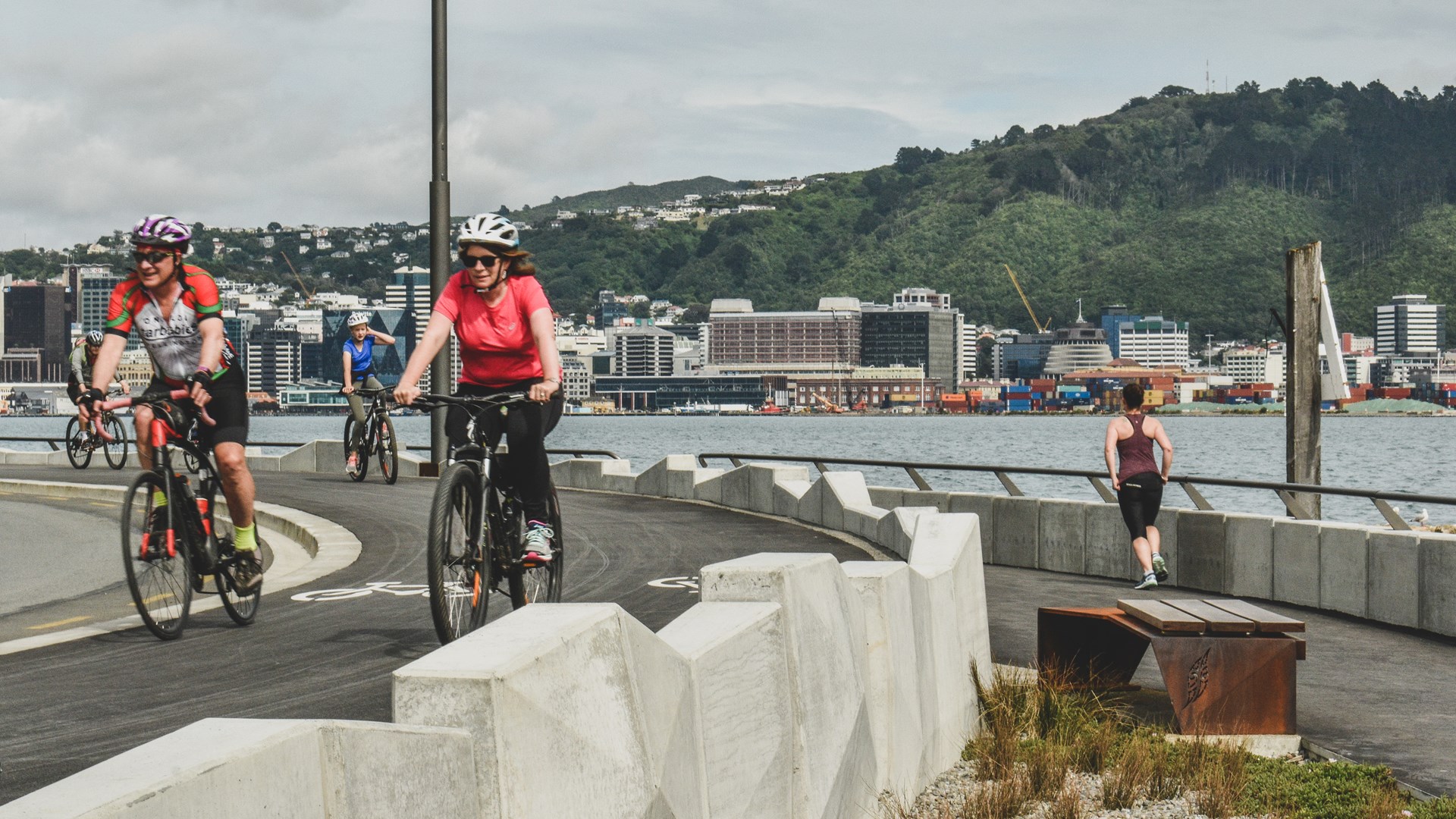 Cyclists on the Ōmarukaikuru/Point Jerningham cycleway in Wellington. Source: Isthmus.

New Zealand is projected to grow by 1.2 million people over the next 30 years.34

That’s equivalent to the population of the South Island.35 Like any projection, it comes with significant uncertainty. Our population will be determined by fertility and mortality rates and migration. The population size can also be impacted by policy settings and global events. Under a very high migration scenario for instance, New Zealand could have as many as 7.4 million people, an increase roughly equivalent to a new city the combined size of Auckland, Wellington and Christchurch.36

Two-thirds of population growth is expected to occur in less than 3% of New Zealand’s land area.37

Our population is urbanising. The populations of cities are likely to increase significantly, placing pressure on existing infrastructure and demanding greater investment. Population growth will likely be concentrated in and around the surrounding areas of five major cities (see Figure 10): Auckland, Hamilton, Tauranga, Christchurch and Wellington. Queenstown, although relatively small, is projected to experience the highest rate of growth (1.6% per year), which will place pressure on existing infrastructure services. But it’s modest in absolute terms. One year of growth in Auckland is equivalent to 30 years of projected growth in Queenstown.

The population of some parts of New Zealand will stay the same or shrink in the long-term. Strategies for managing decline may become more important for these areas. They may need to find ways to reduce the quality of services or even decommission infrastructure to manage the financial burden of maintaining underutilised assets.

The growth of cities and the dominance of Auckland

Figure 10: Distribution of all population growth 2018 to 2048, by territorial authority 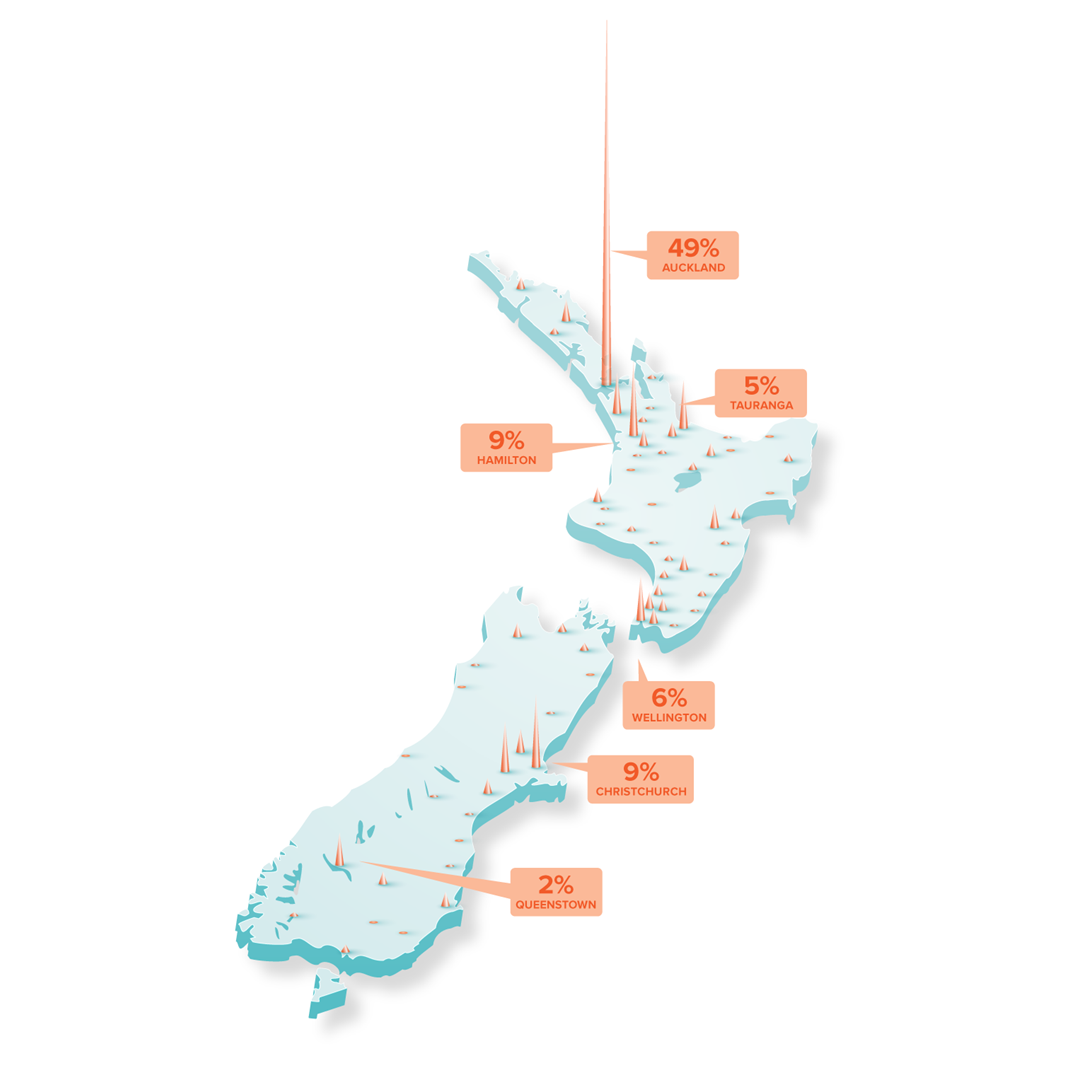 The median age of a New Zealander has risen from 26 in 1970 to 37 today. By the 2030’s, half of our population is likely to be over 40 years of age. By the 2070’s, the median age could have risen to 47. Driven by longer life expectancy and fewer children, the ageing of New Zealand’s population will affect the infrastructure we need and where it will be needed. It will also have funding implications, particularly for those regions that experience low or declining rates of population growth.

“Of New Zealand’s 67 territorial authorities, starting about now and continuing through the 2020’s and 2030’s, 56 will experience population stagnation or decline”

For New Zealand as a whole, the number of people aged over 65 is expected to more than double, while the number of people under 15 years is expected to decline. For every person aged over 65, there’ll be only 2.1 people aged 15 to 64 in 2073, compared to 4.2 people today (see Figure 11). We can, therefore, expect the proportion of the population earning an income to reduce.39 This will affect both our ability to pay for infrastructure through income taxes and the capacity of our workforce to build and maintain infrastructure in the future. We may also see change in the types of infrastructure that are needed, with less infrastructure required for children and more infrastructure required to support an ageing population.

Figure 11: Rate of population growth for the working age population 2020 to 2073 The Māori population is younger and growing faster than the general population.

National demographic trends aren’t the same across all groups and ethnicities and this will have a range of infrastructure implications. Māori have different demographics to New Zealanders as a whole. Māori are younger and the rate of growth of their working age population is significantly faster than it is in other groups. This will for example, change workforce composition over time. The median age for Māori is 24, compared to 41 for New Zealand European/Pākehā (see Figure 12). The Māori population is comparatively concentrated in some less urbanised regions of New Zealand, including Northland and the East Coast, even though a quarter of all Māori in New Zealand live in Auckland.40 Between the 2013 and 2018 censuses, the number of Māori, Asian and Pacific people rose as a proportion of the usually resident population.41 These trends are expected to continue, with the Asian ethnic groups projected to reach 1.2-1.4 million in 2038, and the Pacific ethnic group expected to rise to 530,000 to 650,000.42

Our climate is changing and will impact every aspect of infrastructure.

Climate change is already impacting on our weather. Our rainfall patterns are changing, weather events are getting more extreme and our sea levels are rising.43 Global temperatures and carbon emissions are rising dramatically (see Figure 13).

Infrastructure will be impacted by climate change through both mitigation (actions to limit global warming and its related effects) and adaptation (the process of adjusting to current or expected climate change and its effects).

To limit our impacts on global warming, it’s essential that we invest in infrastructure to achieve the 2050 target of net-zero carbon emissions. Similarly, we need to change the materials that are used in order to minimise the emissions arising from the building of infrastructure (embodied carbon) and reflect the true cost of carbon in infrastructure projects. Infrastructure issues related to mitigation are covered in Section 6.1.

To adjust to climate change, we’ll need to reconsider where we build. The location of new infrastructure like roads, water pipes, hospitals and schools will all be impacted. Coastal areas, places prone to flooding and locations likely to experience increasingly severe droughts will face difficult decisions. These will include options ranging from sea walls to managed retreat. Infrastructure issues related to adaptation are covered in Section 6.4. Source: Adapted from The 2 Degrees Institute (2022)

A technological transformation is underway globally and will affect all infrastructure sectors.

It’s characterised by almost universal connectivity and immense computing power. It draws on the generation and use of vast amounts of data. The list of potentially transformative technologies is long and includes automation, artificial intelligence, augmented and virtual reality and digital twins. Technology has the potential to create major changes in how assets are managed, priced and funded, enabling asset owners to make better use of existing infrastructure. Digital twins, which are virtual, real-time models of infrastructure, have the potential to transform our thinking on how infrastructure sectors work together as a single system (see Figure 14). There’s also an increasing need to identify and respond to cyber security risks facing infrastructure providers and users, as critical systems are increasingly being controlled by remote, automated systems that are vulnerable to new threats. 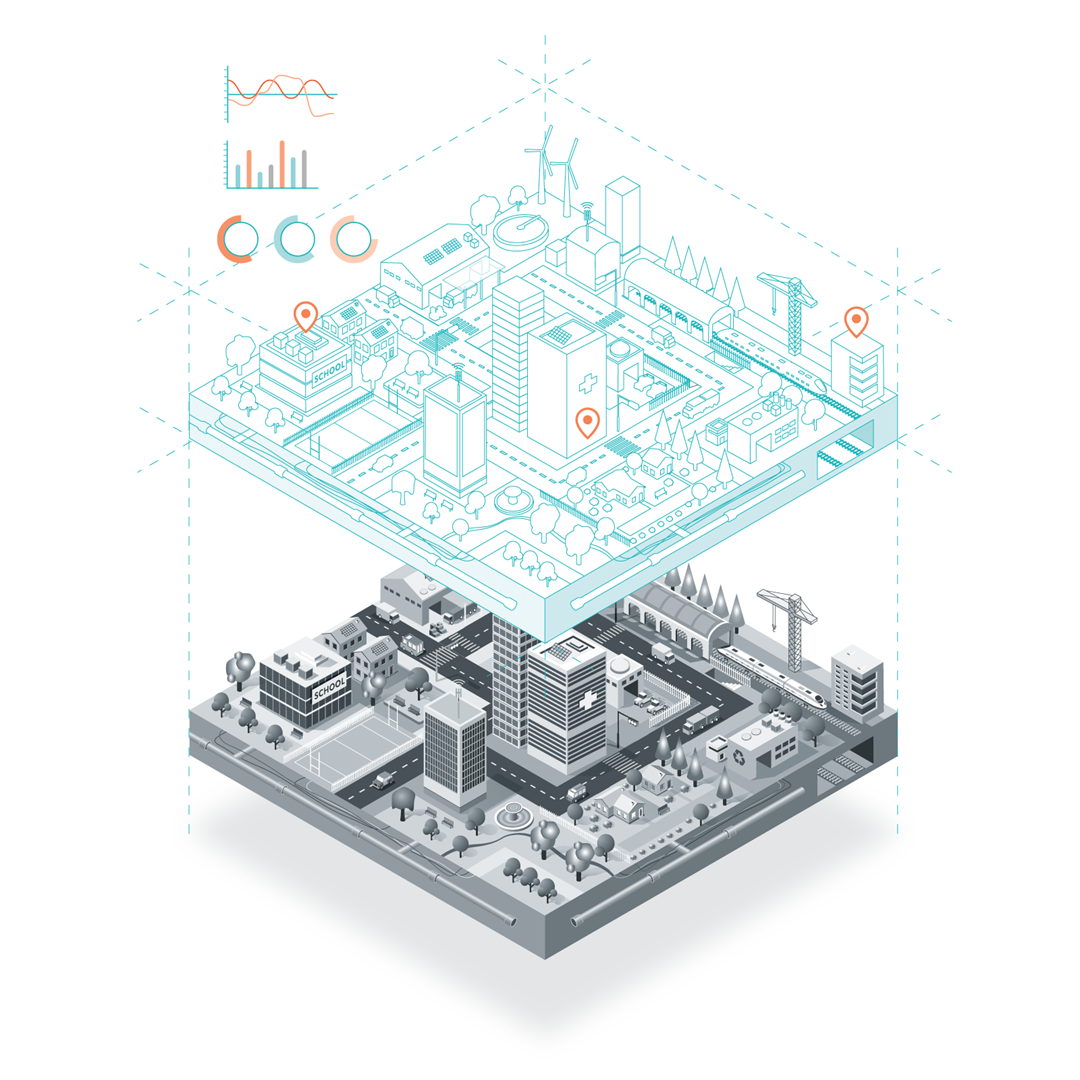